John and Annie Devine are spending their retirement living in a playground. Or, so it could be said.

The Devines live at Katikati’s Fairview Country Club, where their new home enjoys a golf course setting. Both keen golfers, they’re quick to point out that their home hugs the eleventh green and the seventeenth fairway sprawls behind their bedroom wing. And, it’s only a short trip by golf cart to the clubhouse where food, refreshments, tennis courts, a heated pool, petanque court, gym, and lots of comraderies can all be found. How much fun is all that? Add to that the fact they look out on a permanently beautiful manicured lawn (that eleventh green) and there are green views as far as the eye can see… over the golf course to the Kaimai ranges.

Making it even better is the fact John and Annie are living in their favourite of all homes. They’ve had a few – including an ultra-modern home and a Mexican-themed one. This one is Hampton/Cape-Cod inspired and American-born Annie has enjoyed dressing it. They love both their house – which became home in the spring of 2018 - and its locality. 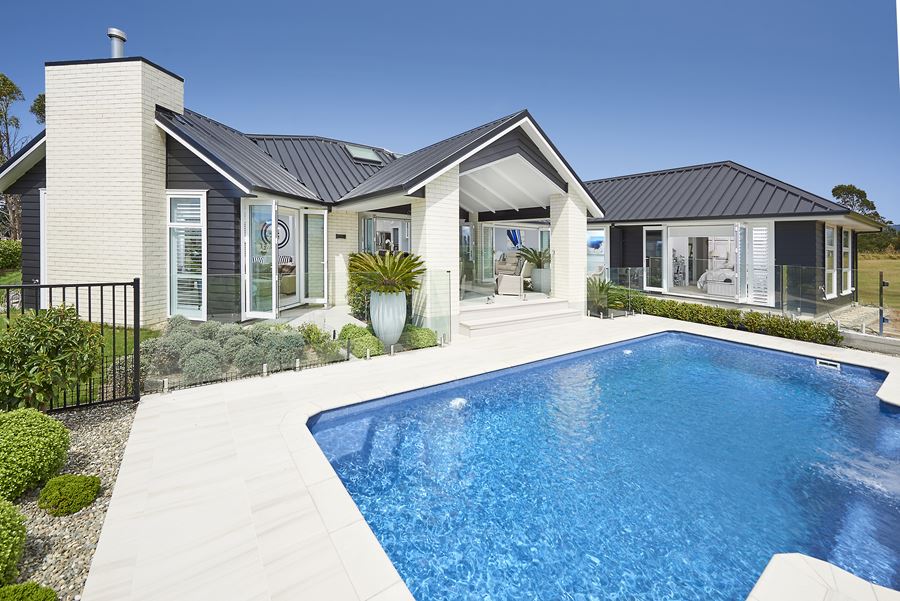 John talks of the day he first sighted the 1,300m2 section. “I said to Annie, ‘I don’t know about you, but I love it’.” Buying was an easy decision as Annie shared the love. Also simple was selecting a building company.

A neighbour had told the Devines of her “fabulous experience” with Classic Builders. Plus, John and Annie’s Auckland-based daughter-in-law had built and sold a spec home with the company and then gone back for more, John tells.

“She couldn’t get over their professionalism. The fact she was in Auckland was no issue as communication was excellent. The post-build follow-up was also incredible. So, when she decided to build again, back she went to Classic Builders. We heard all this and thought ‘we should look at these guys’.”

John believes Classic Builders must have put its “A team” on to constructing their home, which spans 287m2 (including a double garage) and is clad in black horizontal linear boards contrasted with white brick imported from Spain. 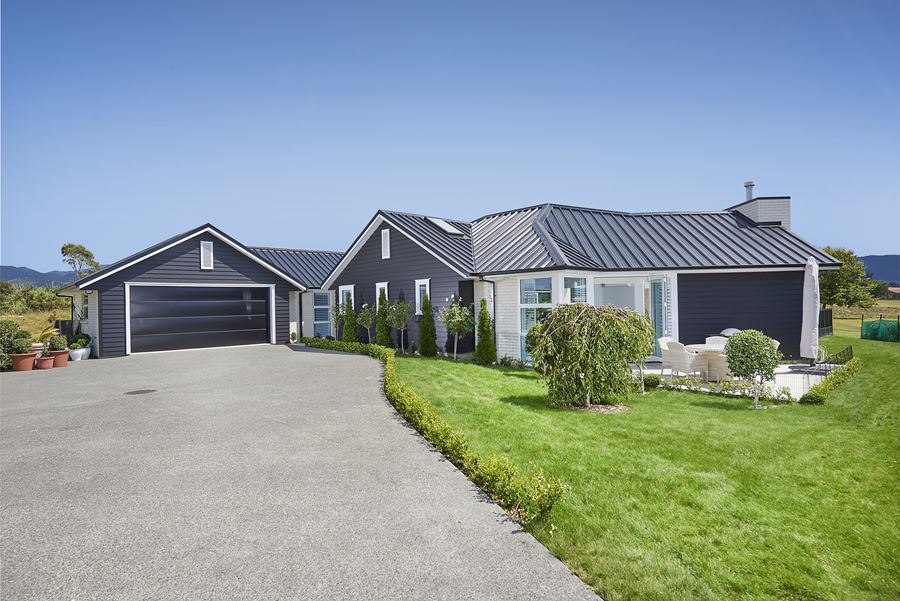 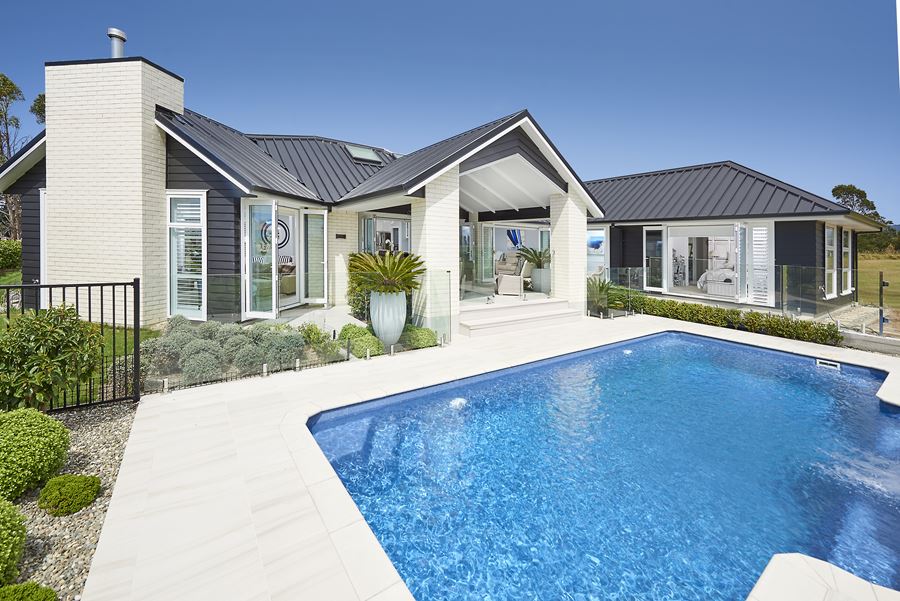 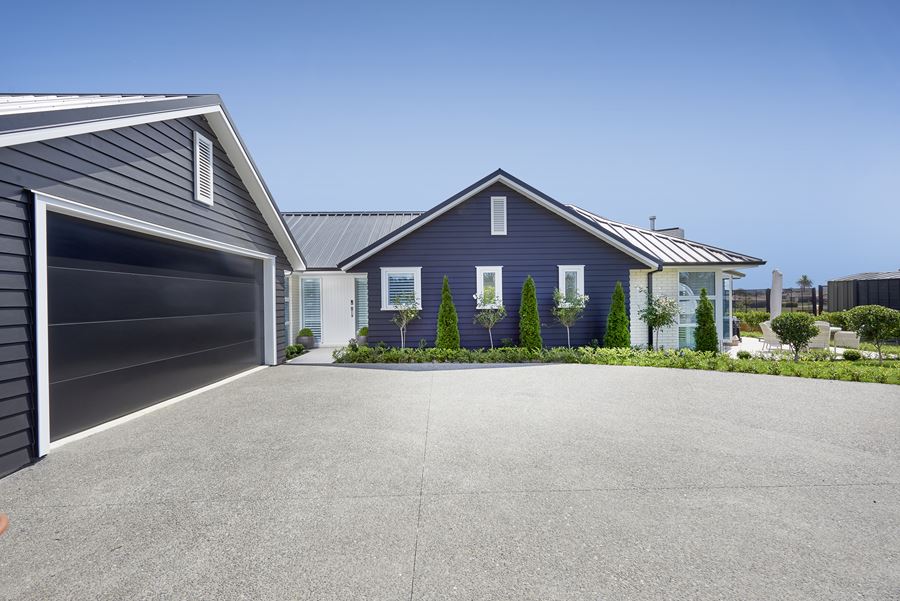 “Everything went like a dream and I would absolutely 110 per cent recommend them. We have done a lot of building projects and this was the best. A lot of people have bad building experiences in this cut-throat life, so it’s nice to be able to say this was a dream experience,” John enthuses.

It wasn’t exactly a regular build. The lounge is a step-down affair and, in keeping with its Hampton theme, the main living area features panelling (wainscoting) one-third of the way up the walls, and a white, tongue-and-grove ceiling with skylights. Completing the look are white Santa Fee shutters, and walls of half-strength Karen Walker powder blue coupled with the white of Resene’s sea fog.

A pitched-roof portico stretches out beyond the dining zone to the eye-catching swimming pool with waterfall feature. Spanning 25 metres, the portico offers shade aplenty, and an abundance of outdoor entertaining space. The waterfall and parametres of the portico area feature coloured lights, adding night-time magic. The master bedroom, lounge, dining and media all feed out to the pool. Thoughtful design ensures the later room can be separated from the general main living area by cavity-sliders that meet at right angles. 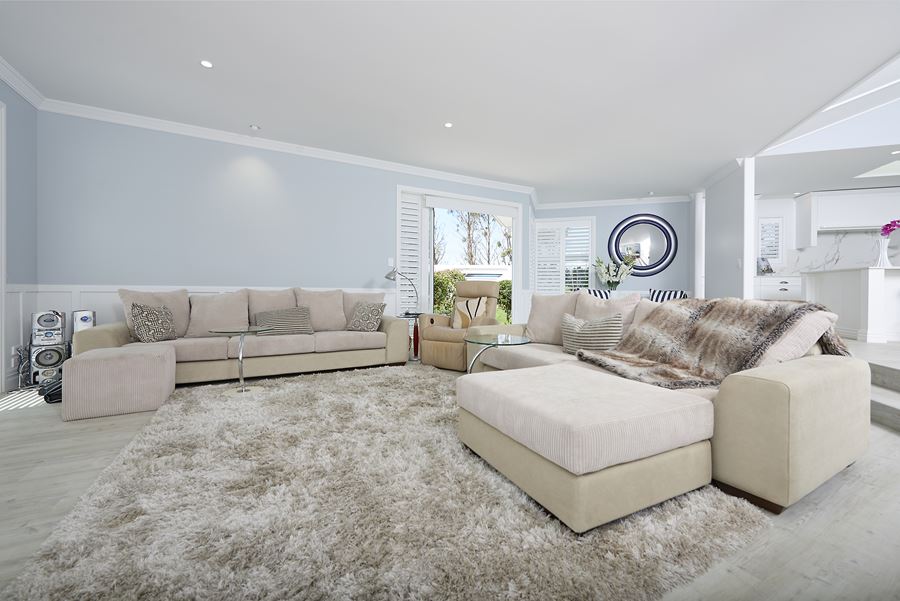 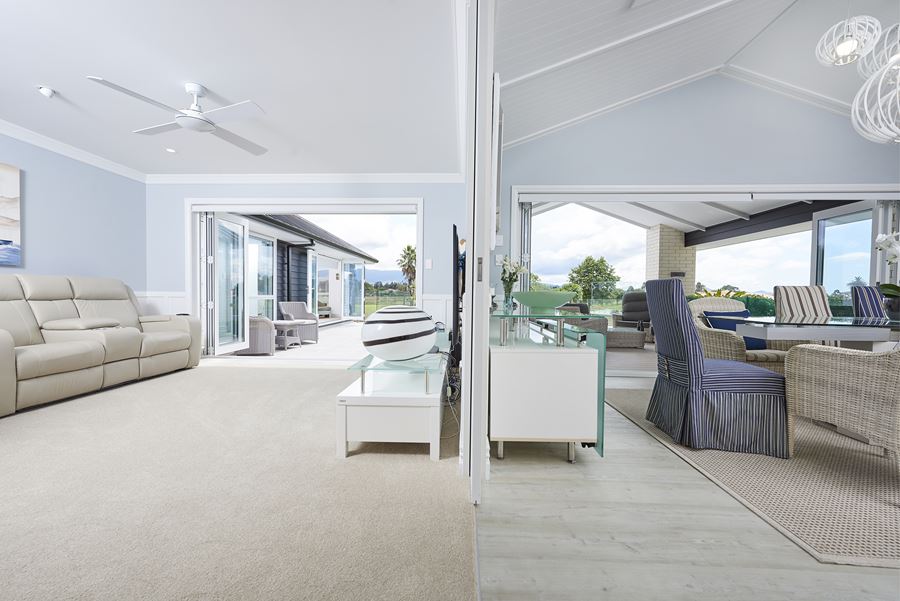 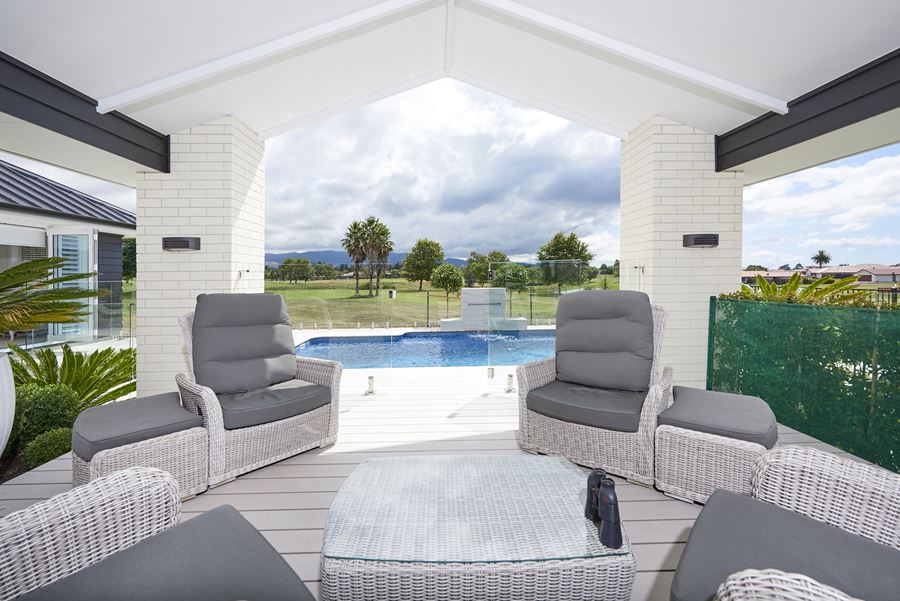 Annie tells how they decided to go the extra mile with things like their outside tiling and decking, eco-glass joinery, and kitchen and bathroom cabinetry. The sandstone tiles were an indulgence they don’t regret and blend perfectly with the imported composite decking that’s a clip-on system requiring neither nails nor paint. As befits the Hamptons theme, kitchen and bathroom cabinetry resemble period furniture and some were imported specially.

The Devines say a lot of thought has gone into the design of the house. The bedroom wing, for example, stretches out to block the westerly winds from the pool area. There’s a patio off the opposite of the house too, so there are plenty of places to catch the sun. They also went to the trouble of configuring wall spaces to fit existing furniture and that has worked a treat.

One thing this couple didn’t want was a house that would date in five minutes. The theme they’ve opted for is timeless, which is just as well as they have no intention of going anywhere in a hurry. “This house works really well for us,” John says. “It is a quality home that has involved nothing but quality workmanship. It is, without a doubt, our favourite house. And, of course, we are surrounded by our playground.”

Inspired to take the next step? Browse some of our standard plans here, or visit your nearest Showhome.

Need to talk to our team?